List of Smartphones that WhatsApp will not support from 2017, Expert Interview

List of Smartphones that WhatsApp will not support from 2017, Expert Interview

As we all know, WhatsApp is a popular messenger for smartphones. It runs on many platforms such as Android, Blackberry OS, Symbian and iOS to name a few.

But earlier this year, WhatsApp announced the discontinuation of its services for older smartphones by the end of 2016.
In a technology upgrade, WhatsApp announced that it will discontinue the development of older smartphones and focus on the platforms that people use widely.
“While these mobile devices have been an important part of our story, they do not offer the kind of capabilities we need to expand our app’s features in the future,” said a WhatsApp spokesperson.
The mobile platforms and their versions which would not be supported by WhatsApp in 2017 are :
– Android : Android 2.1 and Android 2.2
– Windows : Windows Phone 7
– iPhone: 3GS/ iOS 6 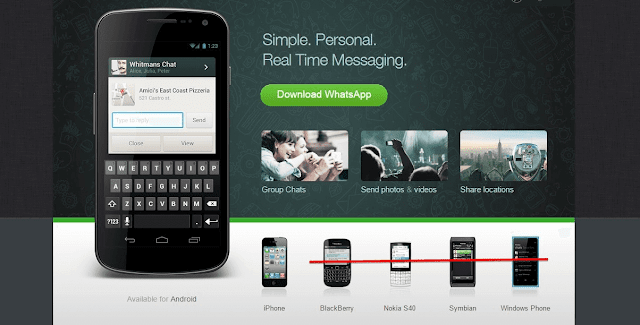 However, app support will be extended for the following devices until June 2017 :
-Blackberry 10 running BBOS
-Nokia S40 running on Symbian S40
-Nokia Devices running on Symbian S60
A majority of the Android devices are supported. But iPhones running on iOS 6 and earlier will not be able to use the services of the app anymore.
Share this article